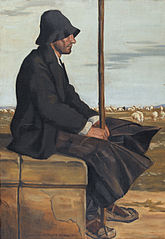 If, in response to yesterdays reading, we want a model of care – both of ourselves and others.  We are given a perfect example in this best known of Psalms.

God’s way to care is to stay with us wherever we go.

To allow us to rest, perhaps encourage us to – a worn out sheep will not complete the journey.  Do I take time to rest in peace and quiet?  To take time and rest with God? Or am I so busy rushing around, even for him, that I never time time to rest and allow him to restore my soul?

Lord, may I rest in you, let you feed me, heal me, restore me and equip me for the journey.

God will lead me in the right paths.  However wrong or scary they feel to me, however much I doubt his wisdom, however much I would prefer life to be going in a different direction; somehow, can I hold tight to his hand and walk with him?  Can I trust him and allow him to lead me?  Or will I insist that I know better, try and take him my way or run off to follow my own path?

Lord, may I be brave enough to walk with you, trust enough to follow you, allow you to lead me and follow your way.

There are valleys, deep and dark.  They hurt, they terrify me, I’d really rather not go that way.

Lord, help me to remember, that however dark the way, you walk with me, Holding tightly to me, knowing my fear, sharing it, in it with me, never leaving me alone.

Lord, may I cling to the safety of you, and allow you to guide me through.

Thank you Lord for the good times.  The times of blessing, of joy, abundance, when my cup overflows.

May I not forget you in those times, but rejoice with you and thank you.  Thank you that I am a guest at your feast

Thank you Lord, that your kindness and love are with me every day – good, bad or indifferent; that you walk with me every step of my journey, however good and pleasant or difficult and arduous.  Thank you that I can trust in you – always.  Thank you

The Lord’s My Shepherd

You are true to your name,
and you lead me
along the right paths.
4 I may walk through valleys
as dark as death,
but I won’t be afraid.
You are with me,
and your shepherd’s rod
makes me feel safe.

5 You treat me to a feast,
while my enemies watch.
You honor me as your guest,
and you fill my cup
until it overflows.
6 Your kindness and love
will always be with me
each day of my life,
and I will live forever
in your house, Lord.

(A psalm by David for the dedication of the temple.)

A Prayer of Thanks

30 I will praise you, Lord!
You saved me from the grave
and kept my enemies
from celebrating my death.
2 I prayed to you, Lord God,
and you healed me,
3     saving me from death
and the grave.

4 Your faithful people, Lord,
will praise you with songs
and honor your holy name.
5 Your anger lasts a little while,
but your kindness lasts
for a lifetime.
At night we may cry,
but when morning comes
we will celebrate.

6 I was carefree and thought,
“I’ll never be shaken!”
7 You, Lord, were my friend,
and you made me strong
as a mighty mountain.
But when you hid your face,
I was crushed.

11 You have turned my sorrow
into joyful dancing.
No longer am I sad
and wearing sackcloth.
12 I thank you from my heart,
and I will never stop
singing your praises,
my Lord and my God.

the action of returning something to a former owner, place, or condition:

21 Jesus later appeared to his disciples along the shore of Lake Tiberias. 2 Simon Peter, Thomas the Twin, Nathanael from Cana in Galilee, and the brothers James and John,were there, together with two other disciples. 3 Simon Peter said, “I’m going fishing!”

The others said, “We will go with you.” They went out in their boat. But they didn’t catch a thing that night.

4 Early the next morning Jesus stood on the shore, but the disciples did not realize who he was. 5 Jesus shouted, “Friends, have you caught anything?”

6 So he told them, “Let your net down on the right side of your boat, and you will catch some fish.”

They did, and the net was so full of fish that they could not drag it up into the boat. 7 Jesus’ favourite disciple told Peter, “It’s the Lord!” When Simon heard that it was the Lord, he put on the clothes that he had taken off while he was working. Then he jumped into the water. 8 The boat was only about a hundred yards from shore. So the other disciples stayed in the boat and dragged in the net full of fish.

9 When the disciples got out of the boat, they saw some bread and a charcoal fire with fish on it. 10 Jesus told his disciples, “Bring some of the fish you just caught.” 11 Simon Peter got back into the boat and dragged the net to shore. In it were one hundred fifty-three large fish, but still the net did not rip.

12 Jesus said, “Come and eat!” But none of the disciples dared ask who he was. They knew he was the Lord. 13 Jesus took the bread in his hands and gave some of it to his disciples. He did the same with the fish. 14 This was the third time that Jesus appeared to his disciples after he was raised from death. 15 When Jesus and his disciples had finished eating, he asked, “Simon son of John, do you love me more than the others do?”

Simon Peter answered, “Yes, Lord, you know I do!”

“Then feed my lambs,” Jesus said.

Peter answered, “Yes, Lord, you know I love you!”

“Then take care of my sheep,” Jesus told him.

Peter was hurt because Jesus had asked him three times if he loved him. So he told Jesus, “Lord, you know everything. You know I love you.”

Jesus replied, “Feed my sheep. 18 I tell you for certain that when you were a young man, you dressed yourself and went wherever you wanted to go. But when you are old, you will hold out your hands. Then others will wrap your belt around you and lead you where you don’t want to go.”

19 Jesus said this to tell how Peter would die and bring honour to God. Then he said to Peter, “Follow me!”

This is one of the most beautiful moments in the whole of Jesus’ life and work.

He appears to all the disciples, reassures them again that he is alive – but then he has a special word for Peter.  Wonderful impetuous Peter.  Always the one to do or say exactly what he was thinking, never one to hold back – yet now living with the fact that when it really mattered, he had let Jesus down.  When challenged he had denied ever having known him.  Not sure what to do any more, he had gone back to his fishing, to the place he felt secure; where he knew what was what – but where Jesus had called him from.

But Jesus comes looking for him.

Peter is given the opportunity to put it all right. Jesus could have just told him that it was ok, he was forgiven, but he goes further than that, he gives Peter the chance to say something, to respond to the questions – 3 times as he denied him 3 times – to say it, to confirm his belief and his love.

Through Jesus’ love, he becomes a restored man, he is returned to who he was – but more than that equipped for what he is going to be.

Peter is given the opportunity to put things right.  Jesus gives us that opportunity too.  If there is something gnawing away at you.  Something you know you’ve got spectacularly wrong, Jesus gives you another chance.  He comes looking for you, to talk to you, where you are, to free you.  We too are invited.  Even if we had run away, gone back to what we knew, he comes to us, gently puts his arm around us, and restores us and equips us.

We need no longer be frightened, ashamed, or feeling that their is nothing left.  Jesus takes us and calls us anew,

Thank you Lord for second chances
and third
and fourth…

Thank you that you come to us
in our shame,
our guilt,
our fear
and give us the opportunity
to make it right
to be forgiven,
to be restored,
to be invited
to continue to follow you

I came across this beautiful song