I am trying to understand
who
and what you are Jesus.

Are you a king,
the King of the Jews?
Or are you deluded,
a fool?

If people got who I am,
truly understood,
they would stop this happening.

But they still don’t understand
the king I am,
what it means,
for me
and for them.
They cannot grasp
the kingdom
I am showing them,
how it works
and the way to be a part of it.

I am the way,
the truth
and life
– if only
you can grasp it.

You,
like everyone else
must decide if I am King,
if I reign for you
and what you will do about it. 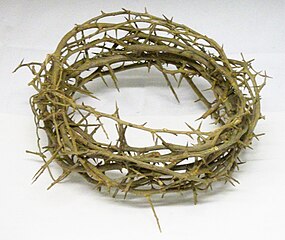 Sing We The King

33 Pilate then went back inside. He called Jesus over and asked, “Are you the king of the Jews?”

34 Jesus answered, “Are you asking this on your own or did someone tell you about me?”

35 “You know I’m not a Jew!” Pilate said. “Your own people and the chief priests brought you to me. What have you done?”

“You are saying that I am a king,” Jesus told him. “I was born into this world to tell about the truth. And everyone who belongs to the truth knows my voice.”

I’ve no idea, why they brought him to me.  Probably trying to get me to do their dirty work, make it all official.  They wanted rid of him, and I was the person they thought would do it.

But I couldn’t do anything.  The rules they insisted he’d broken were religious ones, not ones I could deal with. They were brutal with him.  Who wants thorns pressing into their skin?  Being beaten, whipped – such physical mocking.  Then not content with that they put a purple robe on him too.  Total public humiliation.

I tried again.  To get them to see sense, realise I could condemn him of nothing.

But they were having none of it.  Nothing was going to satisfy them.  They were baying for blood – and determined to get it.  This poor man.  He really had done nothing wrong.  But he’d obviously made some influential people very angry.

They insisted they were Jewish laws that he’d broken.  What could I do?

I wanted to free him.  I tried to give them a get out clause, but they were having none of it.

It really isn’t my fault he died.

I did nothing to make him hang on the cross.

19 Pilate gave orders for Jesus to be beaten with a whip. 2 The soldiers made a crown out of thorn branches and put it on Jesus. Then they put a purple robe on him. 3 They came up to him and said, “Hey, you king of the Jews!” They also hit him with their fists.

4 Once again Pilate went out. This time he said, “I will have Jesus brought out to you again. Then you can see for yourselves that I have not found him guilty.”

5 Jesus came out, wearing the crown of thorns and the purple robe. Pilate said, “Here is the man!”

Pilate told them, “You take him and nail him to a cross! I don’t find him guilty of anything.”

7 The crowd replied, “He claimed to be the Son of God! Our Jewish Law says that he must be put to death.”

8 When Pilate heard this, he was terrified. 9 He went back inside and asked Jesus, “Where are you from?” But Jesus did not answer.

10 “Why won’t you answer my question?” Pilate asked. “Don’t you know that I have the power to let you go free or to nail you to a cross?”

11 Jesus replied, “If God had not given you the power, you couldn’t do anything at all to me. But the one who handed me over to you did something even worse.”

12 Then Pilate wanted to set Jesus free. But the crowd again yelled, “If you set this man free, you are no friend of the Emperor! Anyone who claims to be a king is an enemy of the Emperor.”

13 When Pilate heard this, he brought Jesus out. Then he sat down on the judge’s bench at the place known as “The Stone Pavement.” In Aramaic this pavement is called “Gabbatha.” 14 It was about noon on the day before Passover, and Pilate said to the crowd, “Look at your king!”

“So you want me to nail your king to a cross?” Pilate asked.

The chief priests replied, “The Emperor is our king!” 16 Then Pilate handed Jesus over to be nailed to a cross.

The Thorn Crown of the King

19 1-3 So Pilate took Jesus and had him whipped. The soldiers, having braided a crown from thorns, set it on his head, threw a purple robe over him, and approached him with, “Hail, King of the Jews!” Then they greeted him with slaps in the face.

4-5 Pilate went back out again and said to them, “I present him to you, but I want you to know that I do not find him guilty of any crime.” Just then Jesus came out wearing the thorn crown and purple robe.

Pilate announced, “Here he is: the Man.”

6 When the high priests and police saw him, they shouted in a frenzy, “Crucify! Crucify!”

Pilate told them, “You take him. You crucify him. I find nothing wrong with him.”

7 The Jews answered, “We have a law, and by that law he must die because he claimed to be the Son of God.”

8-9 When Pilate heard this, he became even more scared. He went back into the palace and said to Jesus, “Where did you come from?”

11 Jesus said, “You haven’t a shred of authority over me except what has been given you from heaven. That’s why the one who betrayed me to you has committed a far greater fault.”

12 At this, Pilate tried his best to pardon him, but the Jews shouted him down: “If you pardon this man, you’re no friend of Caesar’s. Anyone setting himself up as ‘king’ defies Caesar.”

13-14 When Pilate heard those words, he led Jesus outside. He sat down at the judgment seat in the area designated Stone Court (in Hebrew, Gabbatha). It was the preparation day for Passover. The hour was noon. Pilate said to the Jews, “Here is your king.”

Pilate said, “I am to crucify your king?”

The high priests answered, “We have no king except Caesar.”