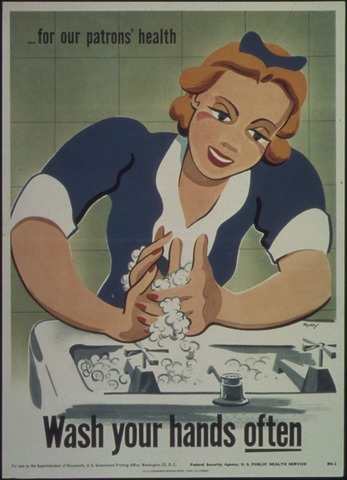 We all know it is important to wash our hands before eating or handling food.  We don’t want to consume more than we bargain for!  So it seems not unreasonable in this passage for the Teachers to be pulling Jesus’ disciples up on not having washed their hands.  These are men who live an itinerant life, and opportunities to wash must have been haphazard to say the least.  How kind of them to worry about the health of the disciples…

But that is not really what they are quibbling about.  They are not talking about hygiene, but about ritual.  It is not about washing your hands, or fruit, or pots and pans – all of which is necessary, but about washing them a certain way, a ritual way, almost a magic way as if it’s not done ‘that’ way, it doesn’t count.  It is just another way of control and rules and regulations that add nothing.

They want to know why Jesus isn’t doing things ‘their’ way.

Jesus, quite bluntly, tells them that they would be better worrying about what comes out of their mouths than what goes in.  There words and behaviour are far more toxic than any bacteria.

What they do and say to people is harming them, potentially killing them, and it is certainly not pleasing God.

There words and actions are meaningless, because they are about their control not God’s ways.  Where is that love that our readings have spoken of all week?

Forgive me Lord,
when I make up rules
about you;
when I focus
on things that don’t matter,
and not
on what does;
when I point to people’s errors
and don’t consider
what I am really doing.

Lord,
take me from toxicity
to love,
for nit-picking
to freedom,
from control
to hope
in
and through
you

The Teaching of the Ancestors

7 Some Pharisees and several teachers of the Law of Moses from Jerusalem came and gathered around Jesus. 2 They noticed that some of his disciples ate without first washing their hands.

3 The Pharisees and many other Jewish people obey the teachings of their ancestors. They always wash their hands in the proper way before eating. 4 None of them will eat anything they buy in the market until it is washed. They also follow a lot of other teachings, such as washing cups, pitchers, and bowls.

5 The Pharisees and teachers asked Jesus, “Why don’t your disciples obey what our ancestors taught us to do? Why do they eat without washing their hands?”

You are nothing but show-offs! The prophet Isaiah was right when he wrote that God had said,

“All of you praise me
with your words,
but you never really
think about me.
7 It is useless for you
to worship me,
when you teach rules
made up by humans.”

8 You disobey God’s commands in order to obey what humans have taught.

14 Jesus called the crowd together again and said, “Pay attention and try to understand what I mean. 15-16 The food that you put into your mouth doesn’t make you unclean and unfit to worship God. The bad words that come out of your mouth are what make you unclean.”

21 Out of your heart come evil thoughts, vulgar deeds, stealing, murder, 22 unfaithfulness in marriage, greed, meanness, deceit, indecency, envy, insults, pride, and foolishness. 23 All of these come from your heart, and they are what make you unfit to worship God.

Oh, it can be so easy to be judgemental, to decide who is worthy, who is in or out – and to make decisions accordingly.  Sometimes those calls are made by ridiculous criteria, sometimes we think our reasons make sense.

The current debate over benefits has brought up some of those, some of our preconceived or inherited ideas, without letting the truths of people’s lives get in the way.  The Truth and Lies Report is doing much to dispel those misconceptions – do read it if you haven’t.  But how many times do we make snap judgements on people, their lifestyle and how they fit in?

The new church that was forming in Acts, was having to work out its theology as it went along, to devise the rules in the ways that seemed sensible and best.  But sometimes their assumptions needed to be challenged.  And the question comes – who are you to decide who and what are clean?  What is the ‘correct’ way to live?  God may have some surprises in store! In the vision God invites Peter to eat animals that he knows are not to be touched by a “good” Jew.  But God challenges the long-held beliefs.  He is doing something new, and the rules are not what Peter thought they were.  For the new church to grow, they are going to have to adjust their concept of what God does and doesn’t want.  And what God says is what God says.

Peter’s vision prepared him for the events that were going to unfold before them – who and on what terms they were going to accept people.  God was going to do something new – and they had better be ready for it, not be stuck arguing about whether it was right!  God has given his gifts to everyone, whoever they are, whatever they have been – all are welcome.  No one is to stand in their way, arguing that they are not welcome, or that there are hoops they need to jump through before they will be accepted.

And I wonder about our churches, our communities – which are actually God’s…

Do we put up barriers, make people meet our criteria, judge by our own misguided assumptions?  Or do we hear God?  Allow him to make the rules?  See those he is calling to himself, and welcome them as we too have been welcomed and accepted by him?

I love the final verse

surely that is what matters in our church…

This is a powerful song, with lots of questions about who are truly welcome

Lord,
may I not make judgements,
rules,
decisions
about who is in
and who is out;
what people have to do to belong
to your community.

May I welcome,
may we welcome
truly,
all who seek to come,
not grudgingly,
not half-heartedly,
no waiting for them to change
and become ‘right’,
but as they are –
called,
welcomed
and loved
by you
fully part of your community

I hate it when I’m ironing something and discover a stain on it.  Something that you thought was clean as it comes off the washing line, turns out not to be, and you have to start the whole washing process over again.

If only there were something absolutely fool-proof for removing stains…

11 Christ came as the high priest of the good things that are now here. He also went into a much better tent that wasn’t made by humans and that doesn’t belong to this world. 12 Then Christ went once for all into the most holy place and freed us from sin forever. He did this by offering his own blood instead of the blood of goats and bulls.

13 According to the Law of Moses, those people who become unclean are not fit to worship God. Yet they will be considered clean, if they are sprinkled with the blood of goats and bulls and with the ashes of a sacrificed calf. 14 But Christ was sinless, and he offered himself as an eternal and spiritual sacrifice to God. That’s why his blood is much more powerful and makes our consciences clear. Now we can serve the living God and no longer do things that lead to death.

‘Sin’ is a strange word.  It has all kinds of “Hell fire and damnation” connotations.  People have been threatened with what will happen to them if they do “it”, and it can be seen as a very unhelpful concept.

But the reality of life is, sadly, that none of us is perfect.  I’m sorry to break that to you.  But there are things that all of us get wrong

these things make life less than perfect for all of us.

The problem can be, as we realise the truth in this – and in our lives, what can we do?

Do we try to compensate?

Are we to make amends?

This passage reminds us again that though there will be things we have got wrong, Jesus has done all that is needed to make sure that those things are no longer a blot on our lives.  Yes there are stains in our lives, blots in our copybook, but Jesus takes them away – and more importantly their effects.  He can stand before God blameless, and he does so on our behalf – so we can be clean again, if we allow him to make us so.

I come to you,

that there are things in my life that I have got wrong.

I come before you now,

and allow you to make me clean