So many similarities between this reading and the Old Testament reading of Elisha.  Funny how God keeps doing the same thing, still asks his people to do the same thing, is still a God of abundance and generosity – but needs us to work with him! 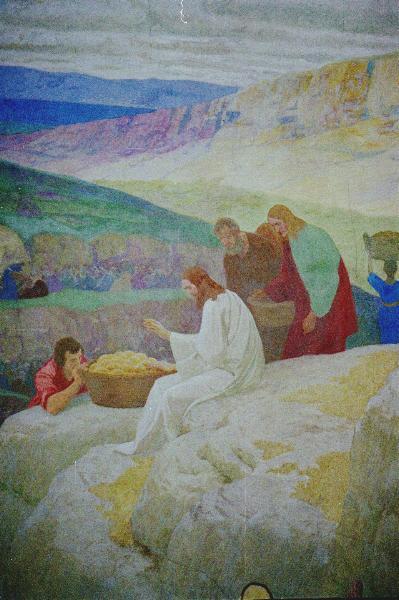 What have I got Lord?
What can I give?

The need is so vast,
I don’t have that sort of money,
I feel unprepared
and unable to help.

There are only scraps,
that’s all I have,
nothing much.

But you can have them
if you think they can help
– though I can’t see how
my meagre offering
is any use.

In your hands Lord
what I have to offer,
however small,
is somehow enough
and beyond.
You can take it,
and it becomes something
beyond my imagining,
beyond my expectations,
beyond my hope.

So I bring to you Lord,
what I have
and pray that you will
make it something
of use
and abundance
in your name
and for your glory

6 Jesus crossed Lake Galilee, which was also known as Lake Tiberias. 2 A large crowd had seen him work miracles to heal the sick, and those people went with him. 3-4 It was almost time for the Jewish festival of Passover, and Jesus went up on a mountain with his disciples and sat down.

5 When Jesus saw the large crowd coming toward him, he asked Philip, “Where will we get enough food to feed all these people?” 6 He said this to test Philip, since he already knew what he was going to do.

7 Philip answered, “Don’t you know that it would take almost a year’s wages just to buy only a little bread for each of these people?”

8 Andrew, the brother of Simon Peter, was one of the disciples. He spoke up and said, 9 “There is a boy here who has five small loaves of barley bread and two fish. But what good is that with all these people?”

10 The ground was covered with grass, and Jesus told his disciples to have everyone sit down. About five thousand men were in the crowd. 11 Jesus took the bread in his hands and gave thanks to God. Then he passed the bread to the people, and he did the same with the fish, until everyone had plenty to eat.

12 The people ate all they wanted, and Jesus told his disciples to gather up the leftovers, so that nothing would be wasted. 13 The disciples gathered them up and filled twelve large baskets with what was left over from the five barley loaves.

14 After the people had seen Jesus work this miracle, they began saying, “This must be the Prophet who is to come into the world!” 15 Jesus realized that they would try to force him to be their king. So he went up on a mountain, where he could be alone.

Jesus Walks on the Water

16 That evening, Jesus’ disciples went down to the lake. 17 They got into a boat and started across for Capernaum. Later that evening Jesus had still not come to them, 18 and a strong wind was making the water rough.

19 When the disciples had rowed for three or four miles, they saw Jesus walking on the water. He kept coming closer to the boat, and they were terrified. 20 But he said, “I am Jesus! Don’t be afraid!” 21 The disciples wanted to take him into the boat, but suddenly the boat reached the shore where they were headed.

I see the need,
these people need to eat.
What can I do?
What have I got?

This is what I offer
to you
for God
to use.

It may not look like enough
to our eyes,
but in God’s hands
there is more than enough.
But it needs
to be offered,
given,
released
to his use.

The hungry are fed
and there is some left over.

Great is our God
who deals in abundance.

Lord,
I see a need,
but do I act?
Do I give?
Share what I have?
Allow you to take
and multiply
generously?

What I have,
may I give
for you
to take
and use,
to feed
and restore.

42 A man from the town of Baal-Shalishah brought Elisha some freshly cut grain and twenty loaves of bread made from the first barley that was harvested. Elisha said, “Give it to the people so they can eat.”

43 “There’s not enough here for a hundred people,” his servant said.

“Just give it to them,” Elisha replied. “The Lord has promised there will be more than enough.”

44 So the servant served the bread and grain to the people. They ate and still had some left over, just as the Lord had promised.

If you look around at people’s shopping trolleys in the supermarkets in the lead up to Christmas, it becomes clear that the fear of people is that they will run out of food and drinks to entertain their guests.  It would of course be very embarrassing to do so!

Jesus at a Wedding in Cana

2 Three days later Mary, the mother of Jesus, was at a wedding feast in the village of Cana in Galilee. 2 Jesus and his disciples had also been invited and were there.

3 When the wine was all gone, Mary said to Jesus, “They don’t have any more wine.”

4 Jesus replied, “Mother, my time hasn’t yet come: You must not tell me what to do.”

5 Mary then said to the servants, “Do whatever Jesus tells you to do.”

6 At the feast there were six stone water jars that were used by the people for washing themselves in the way that their religion said they must. Each jar held about twenty or thirty gallons. 7 Jesus told the servants to fill them to the top with water. Then after the jars had been filled, 8 he said, “Now take some water and give it to the man in charge of the feast.”

The servants did as Jesus told them, 9 and the man in charge drank some of the water that had now turned into wine. He did not know where the wine had come from, but the servants did. He called the bridegroom over 10 and said, “The best wine is always served first. Then after the guests have had plenty, the other wine is served. But you have kept the best until last!”

11 This was Jesus’ first miracle, and he did it in the village of Cana in Galilee. There Jesus showed his glory, and his disciples put their faith in him.

Another story of extravagance and what Jesus can do with the ordinary when he is given it for use.  This ties together the two other lectionary readings for this week.

Jesus can work with whatever he has got.  It doesn’t have to be the best to become the best.

Jesus can take and use whatever we have to bring him.  We needn’t worry about the quality, he deals with that.  It is our offering and our willingness to give it that makes the gift usable.  The host had struggled on with “good-enough” wine, when Jesus was able to supply the best.

What have you got in your life that Jesus can take and use into something magnificent and generous?  And will you let him do so?

Take what I have

and what I am

and make it magnificent