22 Some time later God tested Abraham; he called to him, “Abraham!” And Abraham answered, “Yes, here I am!”

2 “Take your son,” God said, “your only son, Isaac, whom you love so much, and go to the land of Moriah. There on a mountain that I will show you, offer him as a sacrifice to me.”

3 Early the next morning Abraham cut some wood for the sacrifice, loaded his donkey, and took Isaac and two servants with him. They started out for the place that God had told him about. 4 On the third day Abraham saw the place in the distance. 5 Then he said to the servants, “Stay here with the donkey. The boy and I will go over there and worship, and then we will come back to you.”

6 Abraham made Isaac carry the wood for the sacrifice, and he himself carried a knife and live coals for starting the fire. As they walked along together, 7 Isaac spoke up, “Father!”

Isaac asked, “I see that you have the coals and the wood, but where is the lamb for the sacrifice?”

8 Abraham answered, “God himself will provide one.” And the two of them walked on together.

9 When they came to the place which God had told him about, Abraham built an altar and arranged the wood on it. He tied up his son and placed him on the altar, on top of the wood. 10 Then he picked up the knife to kill him. 11 But the angel of the Lord called to him from heaven, “Abraham, Abraham!”

12 “Don’t hurt the boy or do anything to him,” he said. “Now I know that you honor and obey God, because you have not kept back your only son from him.”

13 Abraham looked around and saw a ram caught in a bush by its horns. He went and got it and offered it as a burnt offering instead of his son. 14 Abraham named that place “The Lord Provides.”  And even today people say, “On the Lord‘s mountain he provides.”

Reading this passage at face value, it is very difficult, really problematical.  God asking someone to sacrifice their much longed for and God-given gift.  Has God changed his mind?  Is he so cruel as to do that?  To ask for a child back?  This is not the kind of God I think I know and believe in.

What kind of father would do that to his son?  To go as far as to actually tie him up and lay him on the altar?  Was he deranged, lost all perspective, so caught up in religious mania?

What is this story doing in the bible?  Can it actually have anything to teach us?

We read the unfolding tale knowing what the ending is.  Ultimately Abraham goes on to take Isaac home with him, who goes on to be father of Jacob, and grandfather of the Twelve Tribes of Israel. I guess we don’t know how his life would have gone without this experience?

We can read it through a New Testament lens of God’s sacrifice of his own Son.  But that is not how it would have been for Abraham, or Isaac, as they live this experience, or for those first reading it.  They set out on this journey of faith.  Abraham clearly believed that God was going to do something different, because he told the men “We will be back”, but I don’t suppose he actually knew until it happened.

Just to be clear, I don’t for one minute think that God gives us things and ‘asks for them back’ or just takes them back.  Yes things happen and things and people that we treasured are taken from our lives – but never, ever by God.  See how complex this passage is…

So, I wanted to try and put myself in Abraham’s shoes as he walks this walk to Mount Moriah, his beloved Isaac by his side.  What did he think God was doing and saying – and what might it have to say to us?

I thought I had it all,
everything I’d ever wanted,
even what you promised me,
waited so long for,
and now…

You are asking me to give it up,
surrender,
sacrifice,
offer it back to you.

My most precious thing.
not just mine
but the whole family,
everyone involved.

And there he is,
trotting along beside me –
Isaac,
my amazing son,
longed for love of my life,
trustingly,
quite literally putting his life in my hands.

How can I let him go,
my life,
my future
and the future you promised for me
and the generations to come?

Did you not mean your promise?
Was it just this –
so far and no further?
Is there a greater plan?
Do you have something else in mind?
Something I don’t understand?

So here I am Lord,
here we are,
walking as you asked,
coming to where you called us.
In fear,
in trepidation,
in hoping
that this time
I’ve got it very wrong,
that this is not what you are asking.

But I am here

And I trust that you will provide
as you always have
and you always will.

What is my most precious thing Lord?

What do I cling to
hold tightly to me,
prize above all things?

What have you given me
that fulfils my purpose
and calling?

What am I so thankful to you for?

And yet
I have to ask
if there is anything you are asking me to give you?
Not for you to destroy it,
take everything away,
but so I can receive it back
maybe in a changed way,
a new way,
a stronger way,
your way.

Help me to make sense
of the gifts you have given me
and what you want me to do with them.

To see
and understand
what you provide 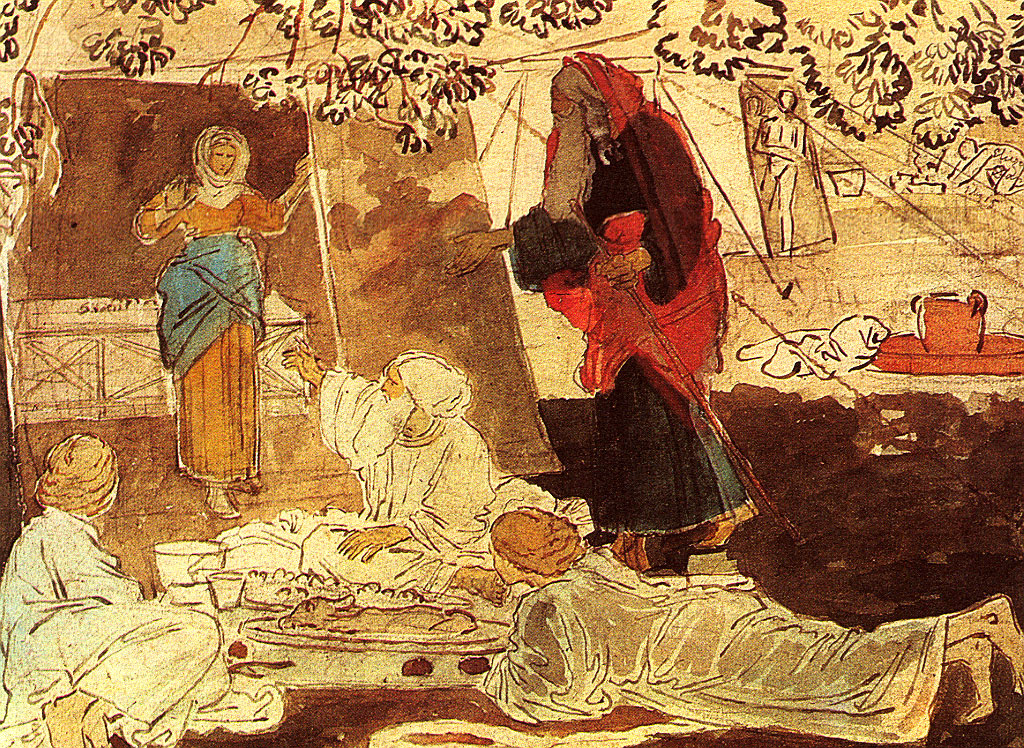 A Son Promised to Abraham and Sarah

The Lord appeared to Abraham by the oaks of Mamre, as he sat at the entrance of his tent in the heat of the day. He looked up and saw three men standing near him. When he saw them, he ran from the tent entrance to meet them, and bowed down to the ground. He said, ‘My lord, if I find favour with you, do not pass by your servant. Let a little water be brought, and wash your feet, and rest yourselves under the tree. Let me bring a little bread, that you may refresh yourselves, and after that you may pass on—since you have come to your servant.’ So they said, ‘Do as you have said.’ And Abraham hastened into the tent to Sarah, and said, ‘Make ready quickly three measures of choice flour, knead it, and make cakes.’ Abraham ran to the herd, and took a calf, tender and good, and gave it to the servant, who hastened to prepare it. Then he took curds and milk and the calf that he had prepared, and set it before them; and he stood by them under the tree while they ate.

They said to him, ‘Where is your wife Sarah?’ And he said, ‘There, in the tent.’ Then one said, ‘I will surely return to you in due season, and your wife Sarah shall have a son.’ And Sarah was listening at the tent entrance behind him. Now Abraham and Sarah were old, advanced in age; it had ceased to be with Sarah after the manner of women. So Sarah laughed to herself, saying, ‘After I have grown old, and my husband is old, shall I have pleasure?’ The Lord said to Abraham, ‘Why did Sarah laugh, and say, “Shall I indeed bear a child, now that I am old?” Is anything too wonderful for the Lord? At the set time I will return to you, in due season, and Sarah shall have a son.’ But Sarah denied, saying, ‘I did not laugh’; for she was afraid. He said, ‘Oh yes, you did laugh.’

You turn up in the strangest of ways Lord.

As I sit
doing nothing really,
resting from the heat,
taking the air.

As strangers passing by
who I can’t help but invite in,
to offer respite from their journey,
shade from the heat,
an opportunity to wash,
refresh and feed.

And in them,
in that action
you speak to me.

God of presence
how will you appear to me?

Who are you bringing before me today?

Who are the strangers
who have so much to teach me,
to show me,
to point me to you,
to truth,
to hope?

Who are you asking me to entertain,
to feed,
to give rest?

Who are you calling me to tend,
to care for,
to refresh?

Who is bringing your word to me
that I might have missed
if I hadn’t invited them in?

How are you going to speak to me?

Please don’t play with me God
you know the pain I carry
deep within,
the feeling of failure,
of emptiness,
of letting this precious man down.

Don’t toy with my emotions
and allow me to hope.

My hope is gone,
my time is over,
what I believed was my purpose
has slipped by.

And yet
you turn up
and make an outrageous promise.

God of promise
who made such an outrageous promise to Sarah,
what promises are you making to me today?

What are you calling me to
that I can’t believe?

What are you asking me to trust you about?

What faith, trust, promise can I carry for you today?

I offer you what I have,
however I feel about it
and leave you
to do the rest.

Bless me
in the unexpected,
the outrageous,
in giving
and in receiving.

May I see you,
invite you in,
hear you
and join with you
on an outrageous journey of faith.

Yet another family crisis (how many can there be in one year I wonder to myself!) has rather occupied my life for the last three weeks –

BUT in that time, people have been beavering away on my behalf and I am delighted and quite excited to announce (cue fanfares, streamers, glitter explosions etc…)

I have been encouraged to produce some of the reflections from this blog into a book, and decided to start with this collection of reflections for Advent and Christmas.  They are not new, but reworked for print.

Voices for Advent and Christmas contains 24 prayers and meditations on the familiar voices of the Christmas Story, from Adam through to Rachel weeping.  It covers the traditional readings of the Nine Lessons and Carols Service, plus others through to Jesus Presentation in the Temple.

It would work as a resource for worship, or as personal reflections to prepare ourselves in this busy season.

There has been a delay at the printers, but I hope it will be available later this week.

The price is £4 plus postage (70p second class within the UK, for other prices please ask)

To order or ask more please complete the form below and I can give you details for paying and you can give me your address.  Payment can be made via paypal or by sending me a cheque.