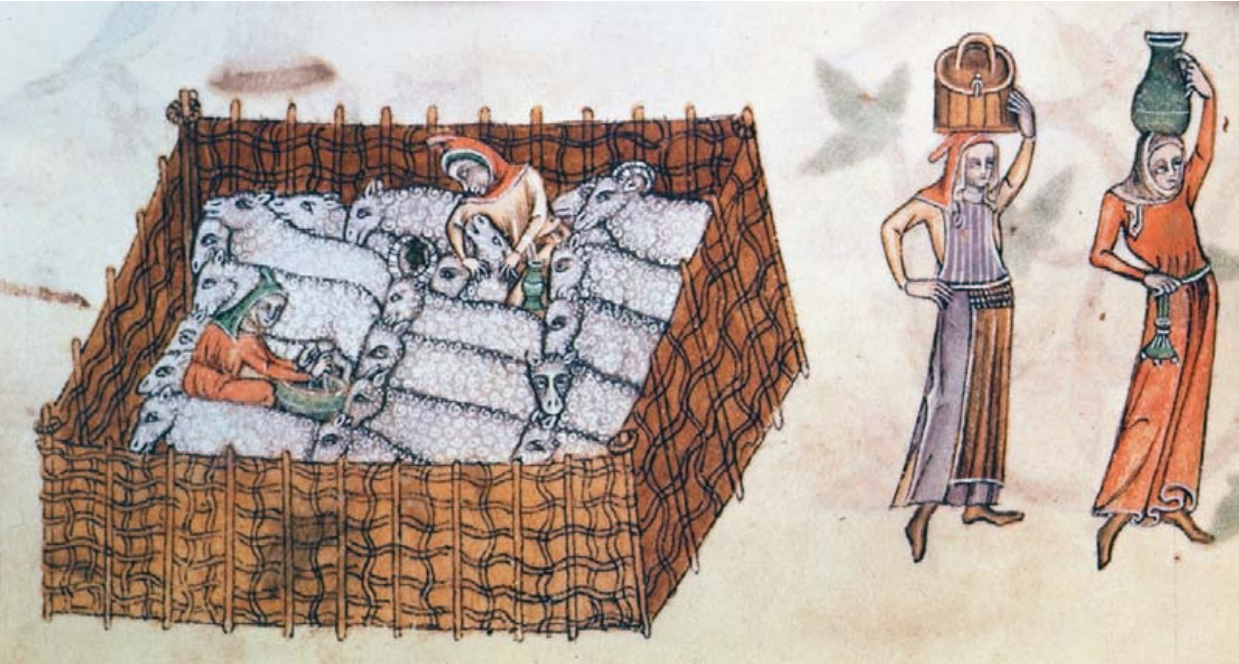 You,
climbing over the walls,
you’re up to no good.
No one who is genuine comes that way.

Why are you here?
What trouble are you coming to cause?
You are not a person that I should have in my life,
but someone to run from.
You do not have my best interests at heart.

The one the gatekeeper knows though,
who is welcome and admitted freely,
you are the care giver,
the love shower-er,
the peace keeper.
The one who loves me and cares for me so deeply,
passionately
and wants the best for me.

I recognise you,
the sound of your voice,
the tread of your foot,
the shape of your presence,
your call to me.
You lead me to the place of safety,
the place where I can be my best self,
the person you made me to be.

I run to you,
follow you,
the one I know
and can trust with my all.

You are my gate,
the trusted path,
the one who takes me to the place of life –
in all it’s fullness,
true life,
real life,
with you life.

I’ll come with you
and choose life
not destruction.

Bless me Lord,
bless us
as we discern
what to hear
who to follow.

The Parable of the Shepherd

10 Jesus said, “I am telling you the truth: the man who does not enter the sheep pen by the gate, but climbs in some other way, is a thief and a robber. 2 The man who goes in through the gate is the shepherd of the sheep. 3 The gatekeeper opens the gate for him; the sheep hear his voice as he calls his own sheep by name, and he leads them out. 4 When he has brought them out, he goes ahead of them, and the sheep follow him, because they know his voice. 5 They will not follow someone else; instead, they will run away from such a person, because they do not know his voice.”

6 Jesus told them this parable, but they did not understand what he meant.

7 So Jesus said again, “I am telling you the truth: I am the gate for the sheep. 8 All others who came before me are thieves and robbers, but the sheep did not listen to them. 9 I am the gate. Those who come in by me will be saved; they will come in and go out and find pasture. 10 The thief comes only in order to steal, kill, and destroy. I have come in order that you might have life—life in all its fullness.

We were on our way to Emmaus. There seemed little point hanging around in Jerusalem.  Jesus was dead.  All those hopes dashed, dreams failed to be realised, thinking this was it – when clearly it wasn’t. God’s not back, the promised Messiah isn’t here after all, and, frankly, we look fools.

The women had come back with tales of the tomb being empty and some angels telling them that Jesus was risen, but how can that be true?  Wishful thinking and the all too easy visions of the bereaved and heartbroken I’m sure.

So we were off. Nothing else for it really.

As we walked along we tried to make sense of it all.  What had really happened?  What had all this been about?  Who was Jesus and what was he really trying to do?

As we went along someone else joined us. I had no idea where he had been as he had no idea about what had happened in the last few days. He must have been buried somewhere to not know about all the commotion that had gone on.  How could he not have heard about Jesus and all the amazing things he had said and done?  How had he not heard about the whole trial, death and crucifixion debacle? Didn’t everyone know about the tomb now being empty?  How could we begin to explain all this to him?

Then he said something really strange. He challenged us on our understanding.  Clearly he knew more than he’d let on!  He said we were slow. Rude! That we had failed to grasp that the Messiah had to suffer these things – it was precisely that that proved he was the Messiah.  And he went right back to the beginning of the scriptures and carefully explained it all.  It was our own personal theology and Christology lesson.  What an amazing encounter on such a day from someone who we thought hadn’t got it.

We came to the village.  He seemed to be going further, but after such a conversation we couldn’t let him go.  It was late and offering hospitality was the right thing to do, so we invited him to stay with us.  The meal was on the table. He reached over and took the bread, and he broke it…

Wow!  Echoes chimed, realisation dawned.  This was Jesus – alive and with us. Without us realising he had made everything clear to us.  He had journeyed here with us and now he was in our house and breaking bread for us.

May we know God’s blessing,
his presence
his reassurance
and his feeding

when we recognise him
and when we don’t.

May we know that he walks with us
whether we realise it
or not.

May we be very sure
when we need to be

and know that he is with us
always

The Walk to Emmaus

13 On that same day two of Jesus’ followers were going to a village named Emmaus, about seven miles from Jerusalem, 14 and they were talking to each other about all the things that had happened. 15 As they talked and discussed, Jesus himself drew near and walked along with them; 16 they saw him, but somehow did not recognize him. 17 Jesus said to them, “What are you talking about to each other, as you walk along?”

They stood still, with sad faces. 18 One of them, named Cleopas, asked him, “Are you the only visitor in Jerusalem who doesn’t know the things that have been happening there these last few days?”

“The things that happened to Jesus of Nazareth,” they answered. “This man was a prophet and was considered by God and by all the people to be powerful in everything he said and did. 20 Our chief priests and rulers handed him over to be sentenced to death, and he was crucified. 21 And we had hoped that he would be the one who was going to set Israel free! Besides all that, this is now the third day since it happened. 22 Some of the women of our group surprised us; they went at dawn to the tomb, 23 but could not find his body. They came back saying they had seen a vision of angels who told them that he is alive. 24 Some of our group went to the tomb and found it exactly as the women had said, but they did not see him.”

25 Then Jesus said to them, “How foolish you are, how slow you are to believe everything the prophets said! 26 Was it not necessary for the Messiah to suffer these things and then to enter his glory?” 27 And Jesus explained to them what was said about himself in all the Scriptures, beginning with the books of Moses and the writings of all the prophets.

28 As they came near the village to which they were going, Jesus acted as if he were going farther; 29 but they held him back, saying, “Stay with us; the day is almost over and it is getting dark.” So he went in to stay with them. 30 He sat down to eat with them, took the bread, and said the blessing; then he broke the bread and gave it to them. 31 Then their eyes were opened and they recognized him, but he disappeared from their sight. 32 They said to each other, “Wasn’t it like a fire burning in us when he talked to us on the road and explained the Scriptures to us?”

33 They got up at once and went back to Jerusalem, where they found the eleven disciples gathered together with the others 34 and saying, “The Lord is risen indeed! He has appeared to Simon!”

35 The two then explained to them what had happened on the road, and how they had recognized the Lord when he broke the bread. 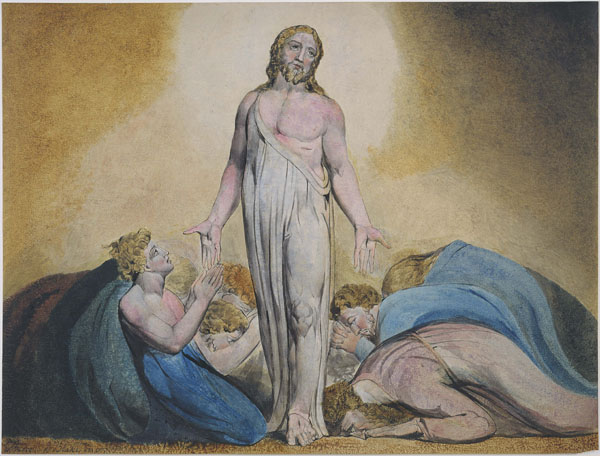 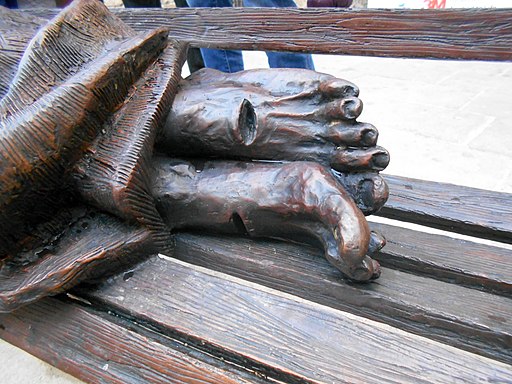