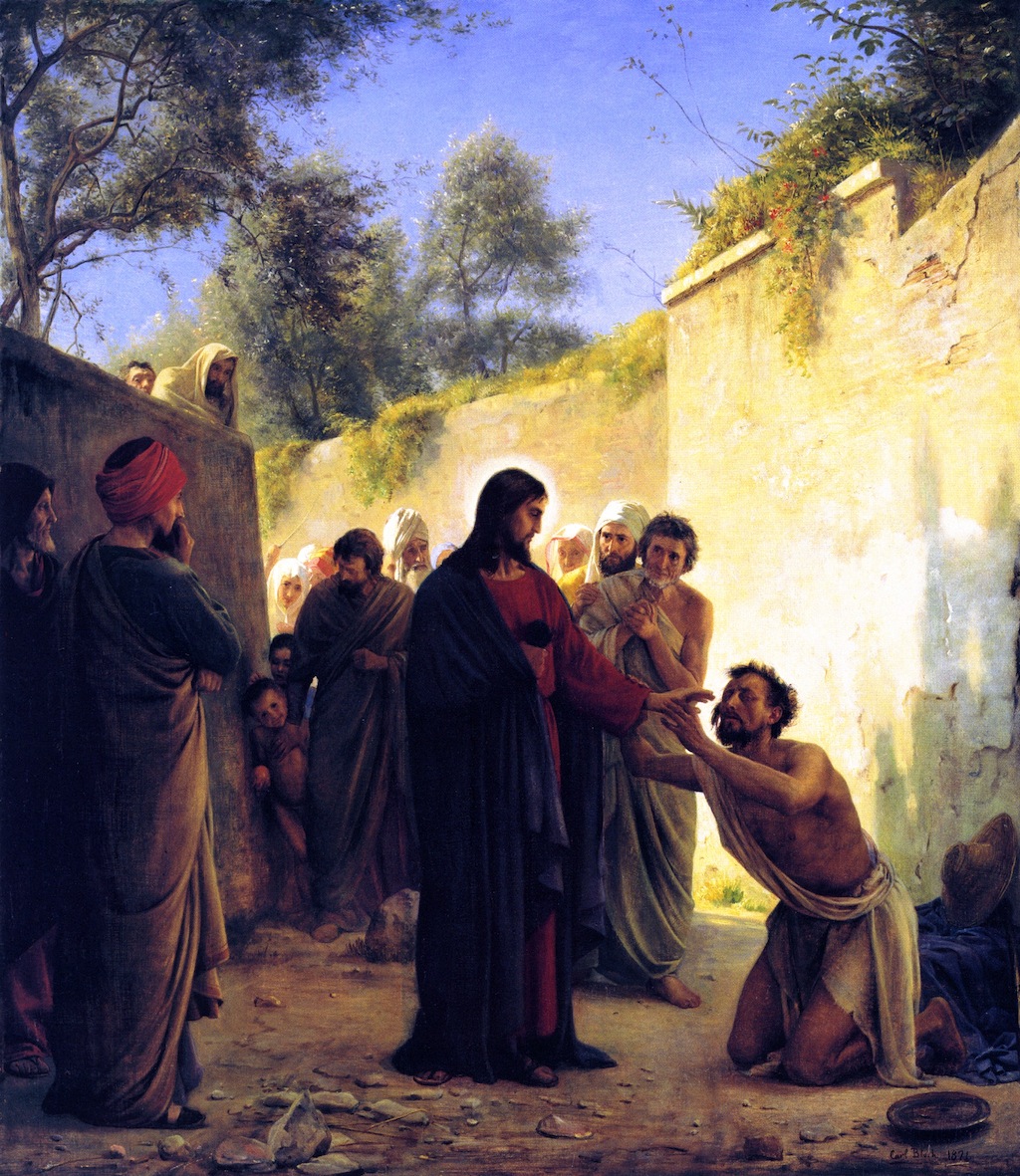 9 As Jesus was walking along, he saw a man who had been born blind. 2 His disciples asked him, “Teacher, whose sin caused him to be born blind? Was it his own or his parents’ sin?”

3 Jesus answered, “His blindness has nothing to do with his sins or his parents’ sins. He is blind so that God’s power might be seen at work in him. 4 As long as it is day, we must do the work of him who sent me; night is coming when no one can work. 5 While I am in the world, I am the light for the world.”

6 After he said this, Jesus spat on the ground and made some mud with the spittle; he rubbed the mud on the man’s eyes 7 and told him, “Go and wash your face in the Pool of Siloam.” (This name means “Sent.”) So the man went, washed his face, and came back seeing.

8 His neighbors, then, and the people who had seen him begging before this, asked, “Isn’t this the man who used to sit and beg?”

So the man himself said, “I am the man.”

11 He answered, “The man called Jesus made some mud, rubbed it on my eyes, and told me to go to Siloam and wash my face. So I went, and as soon as I washed, I could see.”

The Pharisees Investigate the Healing

13 Then they took to the Pharisees the man who had been blind. 14 The day that Jesus made the mud and cured him of his blindness was a Sabbath. 15 The Pharisees, then, asked the man again how he had received his sight. He told them, “He put some mud on my eyes; I washed my face, and now I can see.”

16 Some of the Pharisees said, “The man who did this cannot be from God, for he does not obey the Sabbath law.”

Others, however, said, “How could a man who is a sinner perform such miracles as these?” And there was a division among them.

17 So the Pharisees asked the man once more, “You say he cured you of your blindness—well, what do you say about him?”

“He is a prophet,” the man answered.

18 The Jewish authorities, however, were not willing to believe that he had been blind and could now see, until they called his parents 19 and asked them, “Is this your son? You say that he was born blind; how is it, then, that he can now see?”

20 His parents answered, “We know that he is our son, and we know that he was born blind. 21 But we do not know how it is that he is now able to see, nor do we know who cured him of his blindness. Ask him; he is old enough, and he can answer for himself!” 22 His parents said this because they were afraid of the Jewish authorities, who had already agreed that anyone who said he believed that Jesus was the Messiah would be expelled from the synagogue. 23 That is why his parents said, “He is old enough; ask him!”

24 A second time they called back the man who had been born blind, and said to him, “Promise before God that you will tell the truth! We know that this man who cured you is a sinner.”

27 “I have already told you,” he answered, “and you would not listen. Why do you want to hear it again? Maybe you, too, would like to be his disciples?”

28 They insulted him and said, “You are that fellow’s disciple; but we are Moses’ disciples. 29 We know that God spoke to Moses; as for that fellow, however, we do not even know where he comes from!”

30 The man answered, “What a strange thing that is! You do not know where he comes from, but he cured me of my blindness! 31 We know that God does not listen to sinners; he does listen to people who respect him and do what he wants them to do. 32 Since the beginning of the world nobody has ever heard of anyone giving sight to a person born blind. 33 Unless this man came from God, he would not be able to do a thing.”

34 They answered, “You were born and brought up in sin—and you are trying to teach us?” And they expelled him from the synagogue.

35 When Jesus heard what had happened, he found the man and asked him, “Do you believe in the Son of Man?”

37 Jesus said to him, “You have already seen him, and he is the one who is talking with you now.”

38 “I believe, Lord!” the man said, and knelt down before Jesus.

39 Jesus said, “I came to this world to judge, so that the blind should see and those who see should become blind.”

40 Some Pharisees who were there with him heard him say this and asked him, “Surely you don’t mean that we are blind, too?”

41 Jesus answered, “If you were blind, then you would not be guilty; but since you claim that you can see, this means that you are still guilty.”

I am me, I am who I am, with what I have.  But that day I found myself the centre of attention – well an argument actually.  Someone started trying to use me and my condition to score points.  They were wanting to trap this Jesus we’d all heard so much about – but they wanted to use me to do it.

How was my disability caused?  Had I done something wrong, or my parents?  It seemed a given to them that illness and misfortune were caused by what they call ‘sin’- which seemed to mean getting their rules wrong.

But Jesus stood up to them, made it clear that whatever had caused this it certainly was not because of anything either I or my parents had got wrong, nothing we had done at all.  This was really important.  So many people lived by the understanding that bad things did not happen to good people.  Bad things happening to you had to mean that you had done something bad.  We like things neat and tidy.  We like to know who or what to blame.  But Jesus was quite clear that was not the case.

The sad part about the whole episode is that the only thing that seemed important to the Pharisees was that the Sabbath Law has been broken – or at least their interpretation of it!

Having got nowhere with their first argument, they tried a different tack.  Perhaps this is some set up.  I was never really blind at all – Jesus was just using me to try to make it look like he was a prophet.  They were beginning to get worried that there are those who are thinking that Jesus might be the Messiah.

The leaders want to keep the lid on all this.  But it very soon becomes clear who the blind ones are.

The one who was blind meets Jesus and finds he can see.  The one’s who believe they have the understanding of everything meet Jesus, and it turns out they can see nothing because of their prejudices.  They need to open their eyes – and who knows what they might discover.

Lord
may I open my eyes to you.

May I see
the things you have to show me.

May I not be closed-minded
but wanting to discover more of you.

May I never think
I know everything there is to know,
or have you sorted,
but be open to new possibilities.

Surprise me Lord
I pray