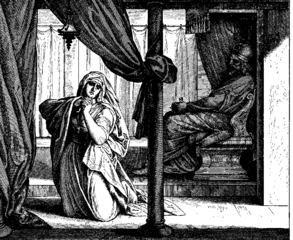 What an amazing array of emotions and family dynamics are played out in this short passage!  It plays out like an episode of a soap opera:

4 Whenever Elkanah offered a sacrifice, he gave some of the meat to Peninnah and some to each of her sons and daughters. 5 But he gave Hannah even more, because he loved Hannah very much, even though the Lord had kept her from having children of her own.

6 Peninnah liked to make Hannah feel miserable about not having any children, 7 especially when the family went to the house of the Lord each year.

One day, Elkanah was there offering a sacrifice, when Hannah began crying and refused to eat. 8 So Elkanah asked, “Hannah, why are you crying? Why won’t you eat? Why do you feel so bad? Don’t I mean more to you than ten sons?”

9 When the sacrifice had been offered, and they had eaten the meal, Hannah got up and went to pray. Eli was sitting in his chair near the door to the place of worship. 10 Hannah was brokenhearted and was crying as she prayed, 11 “Lord All-Powerful, I am your servant, but I am so miserable! Please let me have a son. I will give him to you for as long as he lives, and his hair will never be cut.”

12-13 Hannah prayed silently to the Lord for a long time. But her lips were moving, and Eli thought she was drunk. 14 “How long are you going to stay drunk?” he asked. “Sober up!”

15-16 “Sir, please don’t think I’m no good!” Hannah answered. “I’m not drunk, and I haven’t been drinking. But I do feel miserable and terribly upset. I’ve been praying all this time, telling the Lord about my problems.”

17 Eli replied, “You may go home now and stop worrying. I’m sure the God of Israel will answer your prayer.”

18 “Sir, thank you for being so kind to me,” Hannah said. Then she left, and after eating something, she felt much better.

19 Elkanah and his family got up early the next morning and worshiped the Lord. Then they went back home to Ramah. Later the Lord blessed Elkanah and Hannah 20 with a son. She named him Samuel because she had asked the Lord for him.

So many questions and issues are raised – more questions than answers:

But that is a reality.  Sometimes our prayers are answered exactly as we want – and other times not.  How we deal with that is perhaps more a measure of our faith than the size of the prayers we pray in the first place.  This wasn’t the first time Hannah had prayed this prayer by any means.  Her journey had been a long struggle.  She had suffered on and on.  And now, at this point God responds as she wishes.  Now is the time for that to happen.  We don’t know why God knew that this was the right time, the right way – but it was.  And Hannah is delighted to respond in faith and offering.

But there were so many times when it wasn’t the answer she wanted – as there will be in our lives too.  We have to find a way of carrying on, of continuing to pray, of still holding our situation before God, whilst also allowing him to act in his ways and perhaps change the prayer we pray.

Somehow, some way, one day it will all make sense – but as we see God’s sense and not necessarily as we get our own way.

So many questions.  So many ways of Gods working.  A fair bit of heart-searching.  Maybe a struggle.  Ultimately allowing God to work, and being open to his possibilities.